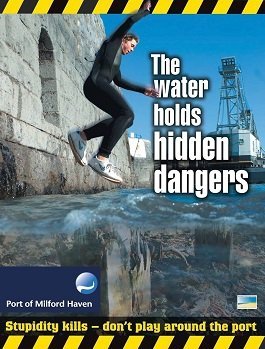 As well as tombstoning, fishing into the lock and the marina basin is also banned and there is clear signage in place to explain this.

Although fewer people are breaking the rules there are still a minority of people who continue to put themselves at risk by jumping into the water off the walls at Milford Marina and Hakin Point. Tombstoning at these locations is extremely dangerous, not only due to large numbers of commercial and leisure vessels entering and leaving the lock, but also the very real risk of suffering the effects of cold-water shock. Strong currents and submerged objects, such as shopping trolleys, can also take people by surprise.

Similarly, fishing into the lock or into the marina and dock basin is not allowed as it can cause hazards for our berth holders and fishing customers who are regularly transiting in and out of the lock. As well as being hazardous to our customers, it is dangerous for the public as it is an open quay.

Anna Malloy, Stakeholder Engagement and Communications Manager at the Port, said “Any kind of abuse towards our staff, who have been instructed to stop dangerous activity, will not be tolerated. We understand that people want to cool off and enjoy themselves when the weather is good, and the last thing we want to do is spoil anyone’s fun, but tombstoning is dangerous and we are trying to keep everyone who comes onto our land, safe.

“We are able, under our bye-laws, to issue fines and banning notices to anyone caught breaking the clear rules we have in place around Milford Marina and Docks. The rules are there for everyone’s safety and to enable the majority of people to come and enjoy the fantastic environment we are so lucky to have.”

Since 2004, the coastguard has dealt with over 200 tombstoning incidents, with more than 70 injuries and 20 deaths.

Photo caption: Signs are located around the marina warning people against tombstoning Safety on the Water

How to stay safe when you use the Milford Haven Waterway