You are here: Home > News & Downloads > News > Get The Boys A Lift named Port’s 2020 Charitable Cause of the Year 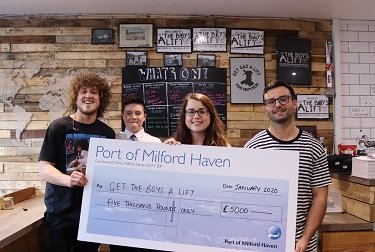 The votes have been counted and the winners are… Get the Boys a Lift!

Each year staff at the Port of Milford Haven vote for a local cause to be named their official charitable cause of the year which means they will receive a financial donation, as well as support through fundraising activities and events.

Get the Boys a Lift is a mental health charity which was started in 2016 by Gareth Owens who began hitchhiking around Wales and selling T-shirts to raise money for a suicide prevention charity. He was soon joined by a group of friends and they now run a not-for-profit coffee shop and drop-in counselling centre in Haverfordwest.

Welcoming the news, Managing Director Gareth Owens said “We’re incredibly grateful for this support and to have the Port of Milford Haven behind us. In 2019 alone, we were fortunate enough to provide free support to nearly 100 people ranging from counselling and employment support, right through to drug and alcohol support. With the backing of the Port, we’re optimistic about continuing to help the community and continuing the growth of our organisation, allowing us to support more people here in Pembrokeshire.”

Lauren Williams, Community Engagement Assistant at the Port, is looking forward to the new partnership. “Get the Boys a Lift have been doing some great work in Pembrokeshire supporting people struggling with their mental health” she commented. “Our staff always come up with some great fundraising ideas so I’m sure we’ll be getting involved in all sorts of activities to help the team.”

For more information about Get the Boys a Lift please visit www.get-the-boys-a-lift.mybigcommerce.com

Photo caption: Lauren Williams from the Port with the team from Get the Boys a Lift