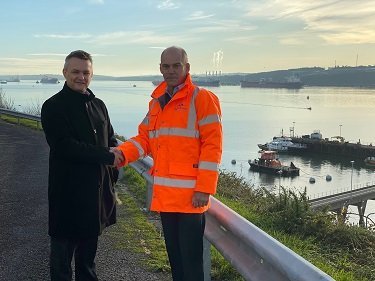 A Memorandum of Understanding has been signed between the Port of Milford Haven and Bombora today, highlighting their commitment to the marine energy industry in Pembrokeshire.

Originating in Australia, Bombora opened offices in Pembroke Dock in 2017 and has grown into a thriving business employing twenty-four full time staff. The company is developing a 1.5 MW mWave™ wave energy converter demonstration device which will harness the potential of marine energy. mWave sits below the surface of the water where wave pressure causes its flexible rubber membrane to inflate and deflate pumping air through a turbine to generate electricity and is one of the most powerful wave energy demonstration devices to be built around the world to date.

The Memorandum of Understanding, signed by Chief Executive of the Port of Milford Haven Andy Jones and Managing Director of Bombora Sam Leighton, will help to strengthen collaboration between the two organisations with the aim of realising the economic and energy opportunities presented by marine renewable energy within the Swansea Bay City Region and further afield.

Andy Jones from the Port commented “There is huge potential for this growing industry here in Pembrokeshire and our base at Pembroke Port is becoming a key site for companies such as Bombora to fabricate and assemble large scale devices for deployment at sea.” He continued, “It’s not just the Port that is benefiting though; the local supply chain has already succeeded in securing contracts with Bombora and plenty more opportunities will become available as the sector grows”.

Meanwhile Bombora’s Sam Leighton said “Since setting up our operational headquarters in Pembroke Dock we have received unprecedented support from the local industry and community. The facilities at Pembroke Port offer us every opportunity to fabricate, assemble, launch, test and maintain our first utility-scale mWave here in Pembrokeshire. This agreement reaffirms our long term commitment to establish Pembrokeshire as a leading centre of excellence for marine renewables.”

About Bombora and mWave™

Bombora has developed a membrane style wave energy converter called ‘mWave™’. Located 10 meters beneath the ocean’s surface, similar to a fully submerged reef, it is invisible from the shoreline. As ocean waves pass over mWave, the membranes deflect pumping air through a turbine to generate electricity. Electricity is directly transferred to shore via a submerged cable.

mWave is unique among wave energy converters as it simultaneously addresses the ‘cost of energy’ and ‘ocean wave survivability’ challenges.

Bombora is currently completing a 1.5MW mWave product validation project in Pembrokeshire, Wales with the support of the Welsh Government and a European Regional Development Fund (ERDF) grant. Bombora is simultaneously developing a global pipeline of commercial wave farm projects.