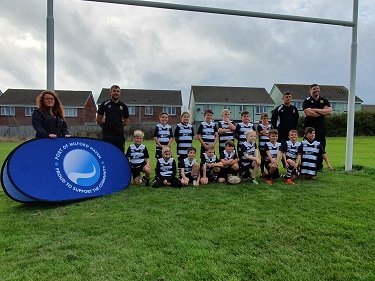 Staff at the Port of Milford Haven have been backing clubs and organisations that enable young people to embrace a wide range of sports.

The Port runs a Community Fund which charities and community groups can apply to, with applications decided upon by a committee of employees from across the organisation.

Over the past few months a large number of youth-based sports clubs have received funding including Hook Juniors Cricket Club, Milford United U12s, Monkton Swifts Junior Football Club (Under 14s), St Ishmaels Junior Cricket Club and Pembroke Dock Harlequins RFC (Under 9s). Some have been able to purchase equipment including bats and goal posts, while others have benefitted from new kit for the players.

Kailea Turner, Stakeholder Engagement Officer, commented “We’re proud to be able to support so many sports teams that young people are involved in. Not only do they teach members new skills, but they also promote behaviours such as team work, problem solving and confidence. The wellbeing of future generations is extremely important to our organisation so it’s great to help groups that offer new opportunities and nurture the talents of so many young people in our community.”

Charities and community groups based in Pembrokeshire seeking funding can apply to the Port online at www.mhpa.co.uk/community-fund Read the stories behind the UK's largest energy port