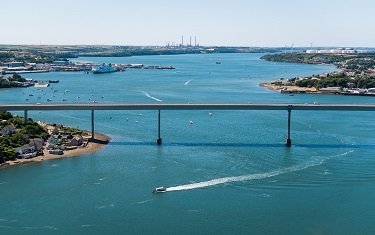 The Port of Milford Haven is offering stakeholders the chance to comment on its performance, priorities and future plans. The annual Stakeholder Survey has been launched to gauge how the public view the UK’s largest energy port.

The 2018 results saw 85% of respondents respond positively, which is a 17% increase over two years. Other noteworthy outcomes were a shift in public perception around the strategy to promote renewable energy in Pembrokeshire, with an 8% increase in support up to 83%. The Port’s role in the community was widely supported as 95% of respondents agreed that it should continue its community work and 86% thought it was important to remain as a Trust Port.

Anna Malloy, Stakeholder Engagement and Communications Manager, is encouraging anyone with an interest in the Port’s activities and operations to get involved. “The Milford Haven Waterway is a unique stretch of water that is used by a wide range of commercial and leisure craft, as well as supporting other important industries such as tourism and fishing. We’re keen to hear from as many people who interact with the Waterway and the Port as possible as we really value the feedback and use it to help shape our strategy moving forward”, she said.

The survey can be completed online at http://bit.ly/POMH2019 and should take no more than 10 minutes. Respondents will be asked to leave their contact details if they wish to enter a prize draw to win £100 of vouchers to spend in any Milford Waterfront retailer, restaurant or café. The survey closes on Friday 2nd August.