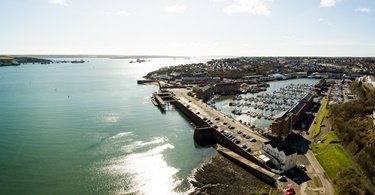 The Port of Milford Haven has published its 2017 Annual Report and Accounts. The report highlights how strategic long term investments have supported the growth of alternate business streams. It also demonstrates the role of diversification in stabilising financial performance during a period of extreme volatility in a core operation.

The Port recorded a profit before tax of £2.6m and a turnover of £22.4m. Cargo throughput was slightly lower than the previous year at 32.1m tonnes. The £3m fall in profit was due mostly to the ongoing volatility in the Liquefied Natural Gas industry which saw record low shipments in 2017, and in part to an additional £1m pension service charge due to changes in long term interest rates.

These numbers mask positive progress elsewhere in the business. A major investment was completed last year which saw the acquisition of Havens Head Retail Park. The retail park will complement the Port’s extensive property portfolio and become a key part of the Milford Waterfront development.

At Milford Waterfront, the Port is creating a desirable place to live, work and play. It will bring together innovative leisure experiences, smart living and vibrant retail spaces to create close to 600 new jobs in Milford Haven. The first construction element is now underway.

Energy remains the Port’s core business stream. The Port has been a key force in developing doorstep opportunities for the marine renewables sector and progress achieved by device developers over the last year has been welcomed. The collaboration between the Port, developers and Pembrokeshire’s high-skill supply chain will continue to drive the industry towards commercialisation. The Port is working with project partners on delivering the Swansea Bay City Region Deal project, Pembroke Dock Marine. This saw the Port invest £650,000 in the early stage design and consenting process for the proposed changes to its port infrastructure. The value of the eventual infrastructure changes is not restricted to the marine renewables sector with clear value to other marine industries.

Trading performance at the deep water cargo handling site, Pembroke Port, saw growth during 2017. With activities such as heavy lift, animal feed and aggregates all contributing to this strong performance.

Activities across the Port during 2017 have aligned with its vision to Build the Haven’s Prosperity. Prosperity is greater than just increased financial wealth - it is about developing opportunities for employment, upskilling, and enhancing personal wellbeing. With extreme volatility in the energy markets, the Port’s diversification strategy has become a central component in delivering this long term vision.

The Port will continue to move forward with steady confidence and face challenges head-on but, with both Pembroke Dock Marine and Milford Waterfront now emerging as plans in delivery mode, the Port is focused on creating a new economic reality for the region.

The 2017 Annual Report and Financial Statements can be viewed online at www.mhpa.co.uk/annual-report

Photo: Milford Waterfront is a key part of the Port’s diversification strategy