You are here: Home > News & Downloads > News > State of the art lock gates are officially opened by Secretary of State for Wales Stephen Crabb 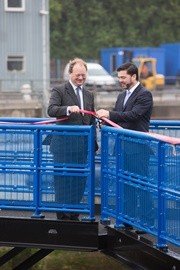 A huge pair of state of the art lock gates, installed in the Port of Milford Haven’s vibrant docks and marina in Pembrokeshire, west Wales, have been officially commissioned today by the Secretary of State for Wales.

The £6m lock gates, standing almost 12 metres high and weighing 90 tonnes each, represent a major upgrade to the giant lock system, first built by the Victorians more than 125 years ago when they created the docks as a home to the large fishing fleets of that time.

Secretary of State for Wales, the Rt Hon Stephen Crabb cut a ribbon on the gates this morning (Friday 26th June) before a flotilla of yachts made a symbolic journey through the new access.  Commenting ahead of the opening he said, “This new investment represents another step forward for the Port of Milford Haven. The £6m project is a significant infrastructure investment and is the first step in the delivery of the Milford Dock Master Plan which will put Milford firmly on the map as a leisure destination.

The new lock gates have made Milford Marina the most accessible tidal marina in the UK and a hub for the leisure marine industry in west Wales. Pembrokeshire has a thriving tourism industry and this new investment has the potential to attract and most importantly develop new opportunities for businesses locally.”

The gates’ completion ensures much faster and more frequent lock times.  Manager of Milford Marina and Docks Alaric Churchill says the gates will make a huge difference for boaters.

“Boats can come and go at any time now, more often and more quickly. That’s great news for berth holders getting out to sail along Pembrokeshire’s beautiful coastline of course. But it’s also great news for visiting boats from near or far, who will find it easier than ever to pop in for the day and enjoy what Milford Marina has to offer,” he said.

The Dock Lock project was part of Visit Wales’ Coastal Tourism project, part funded by the European Regional Development Fund through the Welsh Government, to encourage tourism along the Welsh coastline.

The project by the Port of Milford Haven represents the single biggest investment in the Docks in two generations. It also heralds a major redevelopment of the whole area being overseen by the Port of Milford Haven that will see new shops, restaurants, retail, leisure and homes being built there. Work has already started on rejuvenating Wales’ largest fish docks, where they are building new dockside facilities and seafood processing areas.

Alec Don, Chief Executive at the Port of Milford Haven says that the Port’s aim, as a Trust Port, is to create local jobs and boost the economy.  “Milford Haven has the potential to be a core destination in Pembrokeshire. There are already some fantastic retail outlets and top quality restaurants here, as well as excellent leisure venues including the Torch Theatre, the Waterfront Gallery and Milford Museum.  This year we are adding to the list of attractions with the start of Discover Milford’s heritage boat tours operating out of the marina.  The Milford Dock Master Plan will add to this collection which means soon there’ll be even more reason to come here.”

Photo caption: Secretary of State for Wales the Rt Hon Stephen Crabb is joined by Alec Don, Chief Executive of the Port of Milford Haven, as he cuts the ribbon on the new lock gates at Milford Marina and declares them officially open.

Owned and operated by the Port of Milford Haven, Milford Marina is situated in close proximity to the Pembrokeshire Coast National Park. The marina was established in 1991 following the redevelopment of a previous industrial quayside. Today the marina has 328 berths, which accommodate a variety of sail and power boats in a sheltered environment.

In 2009 Milford Marina achieved 4 Gold Anchor status in The Yacht Harbour Association’s accreditation scheme, and still is the only marina in west Wales to have achieved this accolade. Milford Marina is also a member of the British Marine Federation and the Royal Yachting Association.

As well as being a marine leisure facility, Milford Marina has also become a destination in its own right, with a wide selection of cafes, bars, restaurants, shops, services and attractions.  Milford Marina is also central to the Milford Dock Master Plan – the Port of Milford Haven’s multi-million pound vision to create a mixed use waterside community focused on retail, marine-leisure and fishing.

The Port of Milford Haven is UK’s top energy port and Wales’ busiest port handling around 20% of Britain’s seaborne trade in oil and gas.  It is widely recognised in the industry as the energy capital of the UK.

The Port of Milford Haven also owns and operates Pembroke Port and Milford Marina and Fish Docks.  Activities such as cargo handling, ferry operations, fish landing and cruise calls as well as a first class marina are spread across these two sites.