You are here: Home > Leisure > Safety on the Water > Navigation markers, sounds, lights and flags

It is important that users of the Waterway are aware of the meaning and importance of markers, sounds, lights and flags. Knowing this information could save your life.

There are four types of marks you will see in the Waterway which conform to the IALA System A. They are grouped as Lateral, Cardinal, Isolated Danger or Special marks. Although the collective term for these navigation aids is generally referred to as Buoyage, not all of the marks are floating buoys. Some navigation marks you will encounter within the Waterway will be piles or beacons.

These markers are the equivalent of road signs. It is important you know how to recognise them, what they mean and how they are used, particularly by the larger vessels using the Waterway.

These are used to indicate the port (left) and the starboard (right) sides of a navigable channels. The direction of buoyage is determined by the inward passage of vessels into Milford Haven. In the Waterway, vessels heading upstream from the entrance at St Ann’s Head will be travelling in the direction of buoyage.

When you are afloat remember that large commercial vessels can often only navigate safely within the marked channels. As your vessel will probably be more manoeuvrable you should ensure that you make your intentions clear and comply with Byelaw 22 as shown in the Tide Tables. 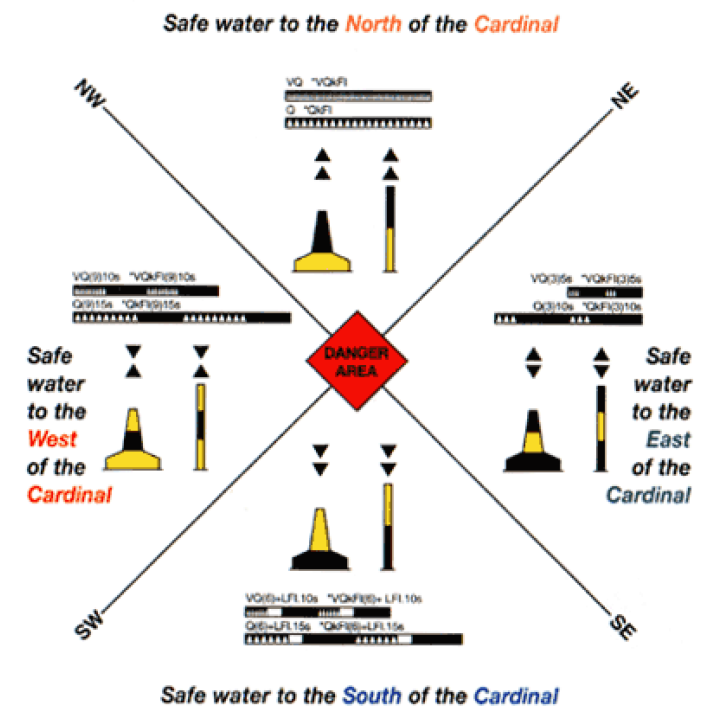 These are used to indicate the location of the best navigable water or to show the safe side on which to pass a danger (rocks, wrecks, shoals, etc) and to draw attention to a feature in a channel. During daylight the most important feature of the cardinal mark is the black double cone topmark and the four different arrangements that indicate the relevant direction of safe water from the mark. The black and yellow horizontal bands used to colour the cardinal marks also indicates where safe water lies in relation to the mark.

At night cardinal marks are lit with a flashing white light. The flash sequence denotes the type of cardinal mark. On each mark one of two sequences will be used these are explained below. For the characteristics of particular marks you should study a chart of the Waterway.

To assist in remembering cardinal marks, associate the number of flashes with a clock face. That means that north is at twelve o'clock, east is at three o'clock, south is at six o'clock and west is at nine o'clock.

These are used to indicate a special area or feature, the nature of which may be found by consulting a chart or sailing directions.

These are on, or moored above, an isolated danger of limited extent that has navigable water all around it.

These are used to indicate that there is navigable water all around the mark, or to indicate the start of a buoyed channel with port and starboard lateral marks.

Whilst out on the Waterway it is common to hear commercial vessels signalling using sound. These sound signals are part of an internationally recognised system which can be used by any vessel to communicate with those around it - which includes recreational vessels. You should be aware of sound signals so you understand the intentions of other users - and act accordingly. Sounds become particularly important when visibility is reduced.

Sound signals are given in a combination of short and/or long blasts on a ships whistle or horn. As a general rule a short blast will last 1 second and a long blast between 4 and 6 seconds.

The following sound signals are in regular use in the Waterway:

Code flags are also used for communications by commercial and recreational vessels. (You may also see some of the below flags during regattas and races but they tend to have a meaning particular to that event.)

Some of the commonly displayed International Code Flags and their meaning when flown individually are: 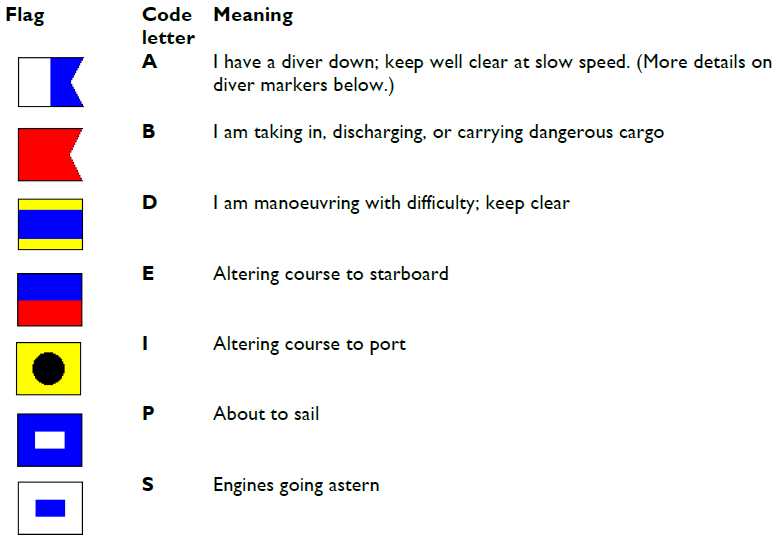 The Waterway and surrounding coast is a popular destination for recreational diving. Vessels accompanying divers are required to display Code Flag A when divers are in the water. When you see a vessel displaying this flag give it a wide berth and pass at an appropriate speed. Remember divers may be some distance from the vessel so you should also keep a good watch on the water around you. Look for rising bubbles and surface markers which can indicate a diver is close to the surface.

Surface marker buoys can take many shapes. Unlike fishing pot markers they are usually constructed of plastic or flexible material and are inflated each time they are used. The most common styles are shown below but it is recommended that you avoid close quarters situations with any float or marker you encounter in the Waterway.

While the ‘A’ flag is most commonly used by dive vessels, a red flag with diagonal white strip (shown right) is also an internationally recognised flag to indicate that divers are in the water. It is more commonly used on surface marker buoys (as shown above).

Lights and shapes are also used by vessels to communicate. If you are likely to be on the water during dusk or after dark, it is critical that you use lights so that you can be seen, and so that others understand the type and size of your vessel. You also need to know what lights are in use so you can take evasive action if necessary. During daylight, shapes can be used to send various messages (as outlined below). 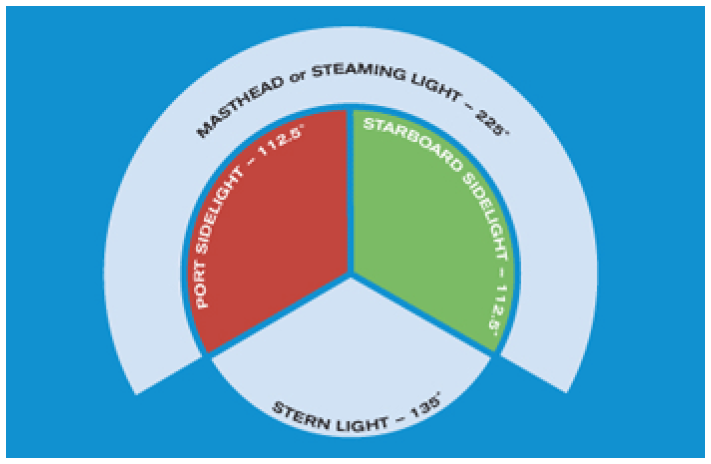 All round white light: a white light showing an unbroken light over an arc of the horizon of 360 degrees.

Masthead light: a white light placed over the fore and aft centreline of a vessel, showing an unbroken light over an arc of the horizon of 225 degrees and fixed to show from anywhere ahead, to just behind the beams of the vessel.

Sidelights: a green light on the starboard (right) side, and a red light on the port (left) side of a vessel. Each shows an unbroken light over an arc of the horizon of 112.5 degrees, and is fixed to show from ahead to just behind the beams of the vessel on its respective side. On a vessel of less than 20 metres in length, the sidelights may be combined in one light unit, carried on the fore and aft centreline of the vessel.

Sternlight: a white light placed near the stern, showing an unbroken light over an arc of the horizon of 135 degrees, fixed to show from behind the vessel.

How lights are used

Vessels under seven metres and capable of less than seven knots:

Needs to display a single white all round light. There is no day shape.

May display port and starboard lights and an all round white light.

Needs to show a white masthead light, a white stern light and port and starboard lights. There is no day shape.

one lower than the aft. In addition to this, there would be port and starboard lights and a stern light. There is no day shape.

Needs to display a tricolour white/red/green light at the top of the mast or port and starboard lights and a white stern light. An alternative for a vessel under sail is a red light over a green light.

There is no day shape, but if a vessel is motor sailing, it should display an inverted triangle.

Any vessel at anchor:

Vessels under 50 metres need to show a single all round white light, while vessels over 50 metres should display two white lights, with the stern one lower than the bow. It is worth noting that many large vessels switch on their deck lights while at anchor, making it very clear that they are not underway. The day shape is a black ball.

Dive boats should show a code flag (as outlined in the flags section). At night a dive boat would display the restricted in ability to manoeuvre lights (see below).

Vessel engaged in fishing (not trawling):

These show the usual lights for a powered vessel with the addition of an all round red light above its white light. The day shape is two triangles, apexes touching.

Vessel restricted in its ability to manoeuvre:

Should show the usual lights but also a red-white-red combination at its masthead. The day shape is two balls with a diamond between them.