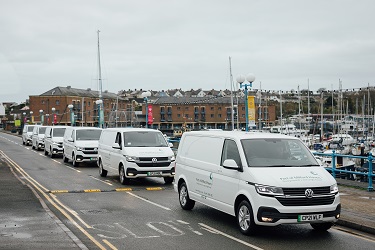 Seven new, electric commercial vehicles are now in service at the Port of Milford Haven as part of the organisation’s commitment to reducing its carbon emissions. Supplied by Sinclair Van Centre Swansea, the Volkswagen Transporter vans are being used across the Port’s estate in Milford Haven and Pembroke Dock.

Procurement Manager at the Port, Caroline Thomas, said “These electric vehicles offer a greener solution to our transport needs which reduces our environmental impact both in terms of air quality and noise pollution. We have a number of temporary charging points across the Port and will soon be installing permanent 22 kW chargers and a rapid 53 kW charger at Milford Waterfront in collaboration with Pembrokeshire County Council.”

The investment in a fleet of electric commercial vehicles is one of multiple initiatives taking place across the Port in a strive to reach Net Zero by 2050.

Tam Bardell, Energy Development Manager, added “In 2019 we switched our energy to a renewable energy tariff which means all of our electricity usage comes from renewable sources. As a Port we are continuously looking for ways to improve our energy efficiency and have invested heavily over the years in solar panels, LED lighting, heat pumps, insulation, and many other smart energy innovations to minimise our carbon emissions.”

With sustainability identified as one of its core values, the Port has committed to make substantial investments over the next five years to support and grow the clean energy cluster around the Haven.

The Port’s vision for the Milford Haven Waterway is that it will play a vital national role in driving new green growth in hydrogen, floating offshore wind (FLOW), wave, and tidal energy generation. This is already being realised through the £60m Pembroke Dock Marine project, which is part of the Swansea Bay City Deal, the Milford Haven: Energy Kingdom project and through the South Wales Industrial Cluster which are all supporting Wales’ transition to Net Zero.

Pembroke Dock Marine is funded by the Swansea Bay City Deal, the European Regional Development Fund through the Welsh Government, and through private investment.

Photo caption: The Port has invested in electric vehicles as part of its commitment to reducing its carbon emissions.