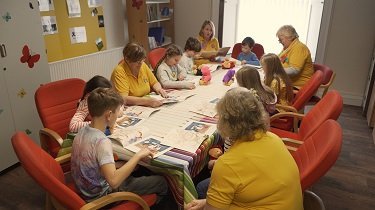 Staff at the Port of Milford Haven have chosen Sandy Bear Children’s Bereavement Charity to be their official charitable cause of the year throughout 2021. Each year employees vote for a Pembrokeshire-based charity to receive both financial and in-kind support for twelve months.

Sandy Bear Children’s Bereavement Charity was established in 1996 following an identified need for a child bereavement service in the county to support young people up to the age of 18 who have suffered, or who are likely to suffer, a bereavement, as well as their families.

Ceri Crichton, Charity Development Lead for Sandy Bear is delighted with the news, commenting “We want to thank the team at the Port of Milford Haven for voting for Sandy Bear and the children and young people that we support. Through this partnership, we will be able to make a positive difference to their lives following a significant bereavement. We very much look forward to our partnership and working with the Port team. It will be an exciting year!”

Lauren Williams, Community Engagement Assistant at the Port, will be working closely with the charity over the coming year. She said, “Sandy Bear provides such an important service to those affected by bereavement, so we’re really pleased that we’ll be able to help them, whether that’s financially or through fundraising and volunteering activities.”

Last year, Get The Boys A Lift, a mental health charity based in Haverfordwest, received over £16,000 from the Port as a result of donations and a range of fundraising activities including a challenge to run, walk, row or cycle 6,140 nautical miles – the same distance that an LNG ship travels from Qatar to Milford Haven.

Sandy Bear is a not-for-profit charity dedicated to improving and strengthening the emotional health and well-being of young people aged 0-18 (and their families), who have experienced the death of a loved one.

We aim to reduce emotional difficulties in childhood and the prevalence of mental illness in later life that can result in a decreased quality of life, poorer educational attainment, social and health problems and increased vulnerability.

We achieve this by working closely with children, young people and families to support them through their grief, and by educating relevant professionals to know what to do when they are dealing with bereavement.