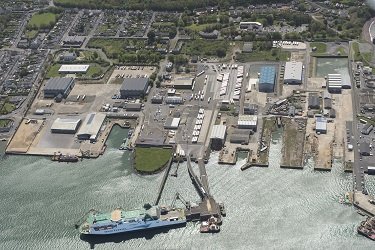 A planning application has recently been submitted by the Port of Milford Haven seeking approval for works to begin at Pembroke Port which will create the infrastructure needed to support the development of a world-class renewable energy and engineering hub, promoting economic growth and creating jobs and prosperity across south west Wales.

The marine energy opportunity off Pembrokeshire’s coastline is world-class. The industry is already creating skilled, year-round employment in Pembrokeshire, taking advantage of the area’s natural wind, wave and tidal resource and its experienced and highly regarded supply chain. But the creation of a modern port facility will be critical to attracting and retaining this fast-growing industry, as well as other blue growth sectors.

“This is an important milestone in the project and after more than four years in development we are eager to move forward and continue to fulfil our role as a Trust Port by creating the foundations on which communities and businesses can thrive”, said Andy Jones, CEO at the Port of Milford Haven.

“This transformational development will play an important role in the region’s post-covid economic recovery as well as making a positive contribution to Wales & UK net zero decarbonisation targets”, Andy continued.

“These works are an integral part of the wider Pembroke Dock Marine project and we have every confidence that the development will create a more attractive operating environment for inward investors and for local businesses, creating year-round, highly- skilled, well paid jobs for our communities”.

The Pembroke Dock Infrastructure project has been part-funded by the European Regional Development Fund through the Welsh Government, together with private investment by the Port of Milford Haven.  The works also form part of the wider £60m Swansea Bay City Deal funded Pembroke Dock Marine project.

If approved, work is expected to commence in 2021 with anticipated completion of the immediate works by 2025. For more details visit www.mhpa.co.uk/pembroke-port-developments

The Port of Milford Haven is a trust port – an independent, commercially run organisation that has statutory responsibilities governed by its Acts, to maintain and improve navigation and the provision of Port and Harbour services and facilities.

Additionally, the Port provides significant financial and in-kind support to a wide variety of local causes.  All profits are retained within the business to fund these objectives.

Pembroke Dock Marine will be a world-class marine energy and engineering centre of excellence for design, test, build and deployment of marine energy devices, with potential for use by other industries. It will expand upon the region’s established facilities and extensive skill base to maximise operational efficiency and increase innovation to drive down the cost of marine energy – an industry projected to be worth £76bn by 2050.

The project will embed a new, clean industry into the region creating jobs and skills development for today’s, and future generations.

The Port of Milford Haven is responsible for the delivery of changes to infrastructure at Pembroke Port. This will ensure developers can maximise operational efficiency and benefit from enhanced land to sea interface enabling the industry to fully mature onsite. The works include: