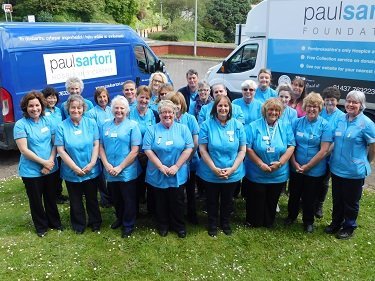 The Paul Sartori Foundation, a charity offering hospice at home care, has been given a financial donation from the Port of Milford Haven which will fund its clinical running costs for a week.

The charity is continuing to offer clinical services, working alongside the NHS, to help with the discharge of patients providing equipment and specialist care in their homes during the Covid-19 pandemic. However, they have found themselves in a vulnerable position as their shops are currently closed and fundraising events have been cancelled, meaning 60% of their revenue has been lost.

Anna Malloy, Stakeholder Engagement and Communications Manager at the Port, said “We have formed close ties with the Paul Sartori Foundation since our staff voted them as our ‘charity of the year’ in 2017 and several staff voiced their eagerness to help the charity, having had personal experience of their professional service. We really wanted to help in some small way, especially as much of their means of fundraising have disappeared.”

In addition to the corporate donation, staff at the Port are finding new ways to raise money for the charity and have set up a Just Giving page where people can donate funds: https://www.justgiving.com/fundraising/port-of-milford-haven-team2

David Evans, Vice Chair of the Paul Sartori Foundation and Chair of the Audit and Finance Sub-committee, said “During these difficult times we are working very closely with Hywel Dda University Health Board in the care of patients living in the later stages of life. We have seen our hours spent caring for patients in their own homes rise by 25% year on year. We have always provided such a valuable service to families in Pembrokeshire and will continue to do so with such fantastic support from businesses like the Port.”

The Paul Sartori Foundation was established back in 1981 and is now a vital support service in Pembrokeshire to those in the later stages of any life-limiting illness. The team provides care to patients and support to families 365 days of the year, operating on a 24/7 on-call basis. At the start of April, 30 patients received 348 hours of care over a one-week period and during the past fortnight 52 items of equipment have been delivered to 25 patients to promote dignity and independence throughout the end of life period.