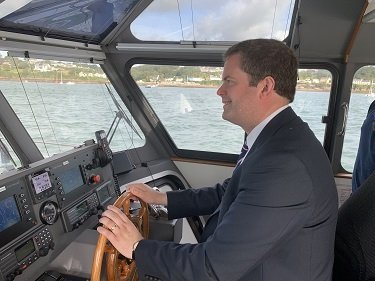 Parliamentary Under-Secretary of State for Wales Kevin Foster MP was joined by Stephen Crabb MP and Paul Davies AM recently as he visited the Port of Milford Haven to view operations at the UK’s largest energy Port.
The party were taken on a tour of the Waterway onboard a pilot vessel, hosted by the Port’s Chief Executive Andy Jones, Chairman Chris Martin and Harbourmaster Mike Ryan, where they were able to discuss the Port’s vital role as an important hub of regionally and nationally significant economic activity and employment.  Naturally this included topics such as Brexit preparedness and the potential opportunity, post-Brexit, for the Port of Milford Haven to be designated as a Freeport.
As supporters of Pembroke Dock Marine which aims to anchor wave, tidal and floating wind renewable energy developers in Pembrokeshire, the Minister, Stephen and Paul were also keen to hear how that project was progressing as part of the Swansea Bay City Deal.
Andy Jones, Chief Executive at the Port of Milford Haven, discussed the potential impact that 0% import tariffs on petrol will have on UK refineries with the Minister.  “Not only is Valero a national asset,” said Andy, “in Pembrokeshire it plays a critical role in supporting an otherwise rural economy and is one of Pembrokeshire’s largest employers. Post Brexit, providing the necessary conditions for continued business investment of businesses like Valero in the face of global competition will be essential in order to secure the viability of the energy cluster here”.
“We welcomed the opportunity to share our thoughts on the idea of Milford Haven being designated as a Freeport and expanded on that idea to develop the concept of a Port Zone” continued Andy.  “Port Zones would include accelerated regulatory processes. Prioritising Port Zones would also help reduce investment risk and uncertainty and make the Port a more attractive proposition for potential global investors.”
“The UK Government has a vision for Freeports to boost investment, drive innovation, attract high skill jobs, support free enterprise and drive growth in left-behind areas across the UK,” continued Andy “and while Freeports tend to be associated with general purpose manufacturing and logistics, the Port of Milford Haven’s internationally significant energy sector offers a unique opportunity.”
“As the UK’s leading energy port with its cluster of anchor businesses, excellent grid connectivity and world-class supply chain, the Port of Milford Haven would have a strong competitive advantage attracting relevant investment opportunities were it to be a Freeport.  A Freeport designation, aligned with the Haven Waterway Enterprise Zone, would seek to support UK oil and gas refining and processing capacity as it competes for global foreign direct investment, restore fish processing capability and support tidal and wave energy development to name a few of the potential opportunities.”
UK Government Minister for Wales Kevin Foster said: “It is fantastic to see the Port of Milford Haven developing plans for a world class centre for marine energy, attracting inward investment and creating more highly skilled jobs. I look forward to working closely with the Port and Welsh Government to develop this project as part of the Swansea Bay City Deal, generating transformational growth across the region.”
-Ends-
Photo caption: Parliamentary Under-Secretary of State for Wales Kevin Foster MP takes the helm onboard one of the Port’s pilot vessels
Notes to Editors
Port of Milford Haven
The Port of Milford Haven is the UK’s top energy port and Wales’ busiest port handling around 20% of Britain’s seaborne trade in oil and gas.  It is widely recognised in the industry as the energy capital of the UK.
The Port, along with the cluster of energy-related businesses along the Waterway, is a key driver of economic activity in Pembrokeshire, attracting inward investment and supporting over 4,000 jobs.
The Port of Milford Haven also owns and operates Pembroke Port and Milford Dock.  Activities such as cargo handling, ferry operations, fish landing and cruise calls as well as a first class marina are spread across these two sites.
One of the most prominent on the West Coast, the Port is in the heart of the Pembrokeshire Coast National Park, the only Coastal National Park in Great Britain. It is marked as a Special Area of Conservation (SAC) and has many areas designated as Sites of Special Scientific Interest (SSSI).
The Port of Milford Haven is a trust port – an independent, commercially run organisation that has statutory responsibilities governed by its Acts, to maintain and improve navigation and the provision of Port and Harbour services and facilities.  Additionally, the Port provides significant financial and in-kind support to a wide variety of local causes.  All profits are retained within the business to fund these objectives.
For further information, visit www.mhpa.co.uk or contact:
Anna Malloy
Port of Milford Haven
01646 696100
anna.malloy@mhpa.co.uk
Back to Previous Page