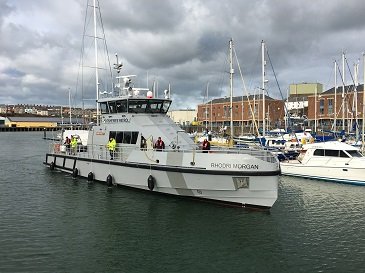 Milford Marina, which is the largest fishing port in Wales, has welcomed the FPV Rhodri Morgan, one of five new fisheries patrol vessels taking to the waters in 2019.

The vessel was built by local company Mainstay Marine Solutions, and was named in Cardiff Bay in December, memorialising the former First Minister Rhodri Morgan.

The vessel is 26 metres long, weighs 75 tons, and carries 11,000 litres of fuel. It also has room for a 6.5 metre sea-boat. It was built, along with four other vessels, to replace the previous fleet. This fleet will patrol Welsh waters looking for illegal fishing activity.

Melanie Durney, Docks and Marina Manager, Milford Marina, commented: “As Wales’ largest fishing port, we are honoured to have the FPV Rhodri Morgan here in the marina. It is an impressive vessel, and we are pleased to see that it will be part of the fleet patrolling the Welsh fishing grounds.”

The Port of Milford Haven also owns and operates Pembroke Port and Milford Dock.  Activities such as cargo handling, ferry operations, fish landing and cruise calls as well as a first class marina are spread across these two sites.
One of the most prominent on the West Coast, the Port is in the heart of the Pembrokeshire Coast National Park, the only Coastal National Park in Great Britain. It is marked as a Special Area of Conservation (SAC) and has many areas designated as Sites of Special Scientific Interest (SSSI). Enjoy exclusive benefits when you take out a 12 month berthing contract at Milford Marina.