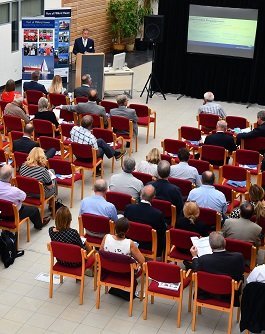 Residents and businesses in Pembrokeshire have expressed increased approval of the Port of Milford Haven’s performance over the last year, in the latest annual survey carried out on behalf of the Port.

When asked how the Port was performing against their overall expectations, 85% of respondents responded positively, which is a 3% increase from last year and 17% increase over 2 years.

The impact of port operations and their influence on Pembrokeshire appears to be felt deeper into the hinterland than in previous years with nearly a third of respondents motivated to take part coming from inland areas away from the traditional port communities.

Other shifts in public perception include a further swing behind the Port’s strategy to promote renewable energy industry in Pembrokeshire, with an 8% increase in support (to 83%).

The Port magazine Onboard, which goes out to homes and businesses along the Waterway has grown in influence over the three years since its launch. It is now cited as the second most useful form of communication coming from the Port.

A recurring theme, reflecting the economic uncertainty felt in Pembrokeshire at the moment, was a call for the Port to continue to play a leading role in promoting and supporting new business opportunities on the Waterway (90% in support). Respondents also put forward a broad range of suggestions for how the Port should be investing in a way that attracts new trade and investment and supports communities and local interest groups.

“The responses underline how important it is for us to remain a strong business so that we can fulfil the role of a Trust Port, nurturing economic activity and communities around the Waterway,” said Alec Don, Chief Executive of the Port of Milford Haven. “It’s clear a busy working port is good for the county and good for the nation too,” he added. “We take that responsibility very seriously and need to work with our partners to ensure we remain a principle agent for economic growth and prosperity in Pembrokeshire.”

The full Stakeholder Survey Report can be read on the Port’s website www.mhpa.co.uk/stakeholder-survey

Photo Caption: Following the survey a number of stakeholders met with the Port at its Annual Stakeholder Meeting where they had an opportunity to ask questions of the management team and board.