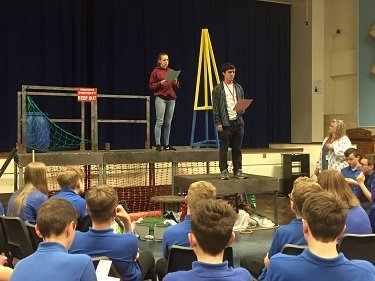 Pupils at Milford Haven School have been learning about the consequences of tombstoning and honing their skills as future scriptwriters.

The Port of Milford Haven and Cardiff Harbour Authority, along with funding from Arts & Business Cymru, commissioned Theatr na nÓg to perform the award-winning show ‘Would You Jump?’ in schools again this summer, but with the addition of scriptwriting workshops for Year 7 and 8 pupils.

The plays follow the story of a character who gives in to peer pressure from his friend and jumps into the water at Milford Marina. His sister jumps in after him and sadly sacrifices her own life to save him. Pupils worked with Sara Lewis, freelance writer and director, to create their own storylines that could be used as a sequel to ‘Would You Jump?’ producing some fantastic results that were performed by the pupils themselves and the professional actors.

Daisy Williams from Theatr na nÓg commented “Working with the pupils in Milford Haven School was brilliant. They came up with some wonderful ideas and showed so much compassion for characters they’d only just met. Some of the lines that they scripted were beautiful, one of my favourites being ‘I smile weakly in success. Tom is lifted out of the water as I am pulled down to take his place. But I have no regrets’.”

The project is one of a number of initiatives that the Port of Milford Haven co-ordinates each year to highlight the dangers of tombstoning. The activity has historically attracted large numbers of young people to Milford Marina during the summer but many don’t realise that it carries many serious risks such as strong currents, cold water shock and the potential that sharp objects could be submerged in the water, hidden from sight.

The Port can and will prosecute anyone caught tombstoning from the area around Milford Marina, however it is hoped that by educating people it will deter them from risking their lives by jumping into the water from there.