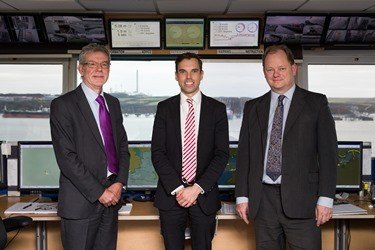 Ken Skates, Wales’ Cabinet Secretary for Economy and Infrastructure, visited the Port of Milford Haven earlier this week (12th December) for a briefing from the Port’s Chairman and Chief Executive on future development plans in the Milford Haven Waterway.

Peter Jones and Alec Don updated the Economy Secretary on the Milford Waterfront project – the proposed £70m investment around Milford Marina and Milford Fish Docks - as well as plans that would see Pembroke Port developed as a world-class marine energy base.

The minister was shown the latest concepts for Milford Waterfront that will include retail units, a hotel and restaurants. He also heard how the Port was working with partners on an exciting bid for £28m investment in the Pembroke Dock Marine Project under the UK’s City Deal programme. The project would transform Pembroke Port into a thriving marine energy centre where firms will be able to draw up, develop and service renewable energy projects to exploit abundant tide and wave resources off the Pembrokeshire coast.

“The Port of Milford Haven is one of Wales’ key economic powerhouses,” said chief executive Alec Don. “It is the nation’s busiest trade gateway, connected by efficient sea routes to countries across the world. It is also home to an outstanding supply chain, great businesses staffed by skilled men and women who have serviced world class maritime and energy industries for more than 50 years,” he continued. “We welcome the current Minister’s focus on the development of a 21st Century infrastructure with new investments into the road and rail network.  These networks need to connect dynamic industrial zones where businesses are empowered to develop the Welsh economy.”

Cabinet Secretary for the Economy and Infrastructure, Ken Skates, said: "The development plans for Milford Haven Port are very exciting and present an opportunity to attract more visitors to the area as well as benefit the local community and economy. The Welsh Government is keen to play a role in supporting projects that that will enable Welsh ports to flourish, and I look forward to working with Milford Haven with a view to making it a world class destination for leisure and industry.”

Alec added, “We look forward to working in close partnership with the Welsh Government on this agenda.”

Photo caption:
Cabinet Secretary for the Economy and Infrastructure, Ken Skates, was shown around Milford Haven’s Port Control where thousands of shipping movements are safely coordinated each year.