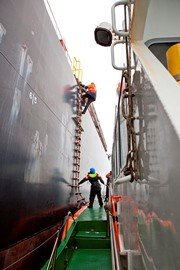 The Port of Milford Haven has published its accounts for 2015, showing a strong performance.

The Port recorded a profit before tax of £4.4m with the port experiencing net growth in cargo volumes, up by over 10% on 2014 levels, at 37.8 million tonnes.

Valero remained consistently busy and the Port benefited from a continued increase in volumes of LNG.  The storage terminals at SemLogistics and Puma Energy also saw reasonable levels of activity.

Chief Executive at the Port of Milford Haven, Alec Don, welcomed the results. “Not only has the port remained busy, it has also attracted new business to the area,” he said. “We have continued to invest in both services and facilities to ensure we can maintain the port’s status as the UK’s biggest gateway for seaborne energy products. Considerable praise must go to our staff. Their skill and dedication has kept the port running efficiently and effectively,” he added.

Investment in operations up-river at Pembroke Port also yielded results.  The port remained South Wales’ largest and most successful ferry terminal. It also attracted a new contract to handle and ship out refuse-derived fuel to Sweden.  The diversification strategy to attract manufacture and maintenance contracts for marine renewables took a leap forward at the end of 2015 with the deployment of Tidal Energy Limited’s prototype device, DeltaStream, constructed in the port.

The Port of Milford Haven also owns and operates Milford Dock and Marina, base of Wales’ largest fishing port. Planning approval for a wholesale redevelopment of the area was secured in 2015, paving the way for further investment and modernisation.

“Last year saw significant improvements both in the water, with new lock gates bringing significantly enhanced and shortened passage times into and out of the docks and marina, and by the water with new fish handling and processing facilities,” said Alec. “Our strategy to invest in the growth of fish handling, processing and retail will also be a catalyst for further business activity here,” he added. “Across the docks we have laid the foundations for comprehensive development that will see new retail and visitor attractions built. In turn, this will generate jobs and encourage further inward investment.”

“We are investing for the future. However, this can only be achieved through close collaboration with partners and in a business environment that makes it easy to invest, operate and employ.”

The Port’s 2015 Annual Reports and Accounts can be viewed online at www.mhpa.co.uk/annual-report