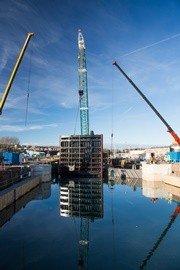 The £6m project to install a massive set of lock gates in Milford Haven, transforming the way that leisure boaters access and exit Milford Marina, is nearing completion. Since taking delivery of the 90 tonne gates in December, Port of Milford Haven engineers have been working with gate manufacturers, Ravestein, on a commissioning phase which involves further survey work to check the interface between the civil engineering works and the gates.

Tim Bownes, Engineering Director at the Port of Milford Haven, said:
“From an engineering point of view this has been a technically challenging but exciting project, since the introduction of a completely new set of lock gates is a rare occurrence in British docks. During commissioning and final surveys we have identified that the manufacturers need to make some small adjustments in order to ensure that the gates are a tight fit. However, this should only take a short period of time and we remain on track to be fully operational before the busy season. We want to say a huge thank you to all the dock and marina users and local residents who continue to patiently wait for works to be completed.”

The new gates will make Milford Marina one of the most accessible locked marinas anywhere in Britain and forms part of a wider investment programme planned for Milford Dock. It is evidence of the Port’s commitment to build Milford Haven’s reputation as a unique waterfront destination, boosting leisure and tourism business in the town.

The project to build new gates in the lock is part of Visit Wales' Coastal Tourism Project, part funded by the European Regional Development Fund through the Welsh Government, to encourage tourism along the Welsh coastline.

>Photo caption: The 90 tonne lock gates that were installed in December

The Port of Milford Haven is responsible for the biggest port in Wales, and is the third largest port in the UK.  Each year it handles around 29% of Britain’s seaborne trade in oil and gas and is widely recognised in the industry as the energy capital of the UK.

The Port, along with the cluster of energy-related businesses along the Waterway, is a key driver of economic activity in Pembrokeshire, attracting inward investment and supporting over 4,000 thousand jobs.